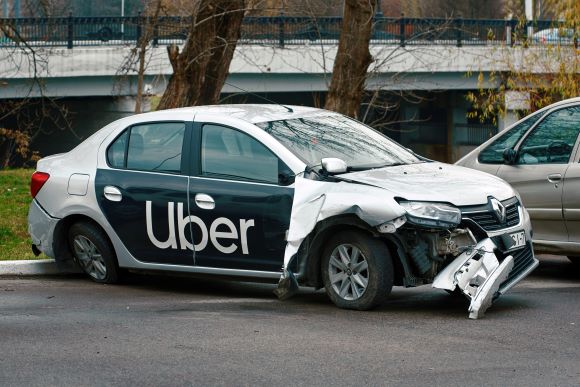 Were you or a loved one injured in a car accident?

Get matched with an accident attorney in 60 seconds or less.

If you’ve been injured in a car collision involving an Uber driver, who is held liable will depend on several factors. These include the details of the crash, the type of insurance the at-fault driver has, and what the Uber driver was doing at the time of the accident. Our Uber car accident guide will explain the common liability scenarios if you’re hurt while riding in an Uber or injured by an Uber driver as another motorist or pedestrian.

Uber’s popular rideshare app allows passengers to travel around town without worrying about parking or gathering enough cash for the trip. In 2019, riders caught 6.9 billion rides with the app, according to Forbes. Like most Americans, you’ve probably ridden in at least one rideshare without worrying about whose insurance is covering you while you’re in the vehicle.

But what happens if your Uber driver gets into an accident while you’re riding in the vehicle? What happens if you’re hit by an Uber as a pedestrian or while you’re driving your own vehicle? This is more common than you think. A report from the University of Chicago’s Booth School of Business found that rideshare services like Uber may have led to a 3 percent increase in overall car collision fatalities.

If you’re hurt in an Uber car accident, who is liable? It depends.

One complicating factor in the Uber car accident process is that rideshare drivers straddle the line between being classified as commercial and personal drivers.

Because they are technically independent contractors, Uber drivers aren’t employees of Uber. Drivers use their own vehicles to complete rides, so they historically haven’t been required to obtain commercial vehicle insurance unlike other professional drivers (like bus drivers).

For a long time, rideshare companies declined to carry driver insurance and instead had drivers rely on their own insurance policies in the event of accidents. When Uber drivers who had never obtained commercial auto insurance got into collisions, this created issues with Uber car accident claims because the accidents often happened during non personal work trips. This would be reflected in the Uber accident report and make insurers less likely to pay.

Uber began changing its insurance policies following a 2013 lawsuit after a six-year-old (Sofia Liu) died in an accident caused by an Uber driver. She, her mother, and her brother were hit in a crosswalk by the driver who was logged into the Uber app but was not carrying any passengers. Uber settled the case for an undisclosed and sealed amount.

As a result of that case, Uber’s coverage expanded to include crashes and collisions caused by Uber drivers even if they didn’t have any passengers but were logged into the Uber app and ready to accept a rider.

Your Driver is At Fault: Who is Liable?

Uber teams up with national insurance companies to provide coverage to their drivers and passengers. If your driver was operating the vehicle with passengers in it and you were injured in a car accident, Uber will likely provide up to $1 million in liability coverage.

If a driver was available on the app and waiting for a ride request-with no passenger in their car-when they hit you (in another car), you will first file a claim through the driver’s personal insurance. In these cases, Uber’s contingency insurance can also kick in as a supplement. Uber can pay up to $50,000 in bodily injury per person (with a total of $100,000 per accident). For property damage, Uber can pay up to $25,000.

Another Driver is At Fault: Who is Liable?

If you’re injured in a car accident while riding in an Uber but your rideshare driver wasn’t at fault for the collision, the at-fault driver is usually considered liable. Just like if you were a passenger in a typical non-rideshare accident, you can pursue damages for the accident against the at-fault driver by filing a claim with their insurance company.

Uber also provides uninsured/underinsured motorist bodily injury coverage if someone is at fault and they don’t have enough insurance coverage for damages or sustained injuries. This additional insurance provision may also kick in following a hit-and-run.

What if an Uber Driver Hits Me While They’re Offline?

Uber’s liability protection only applies to Uber car accident claims when drivers are actively working. If a driver hits you while offline and their driver app is off, you must go through your insurance and the driver’s insurance policy for damages.

Car accidents involving Uber rideshares happen daily, but successfully filing a car accident claim and receiving compensation for sustained injuries isn’t a cut-and-dried process. Insurance companies evaluate many factors, including whether the Uber driver was online and available to accept rideshare clients, which driver was at fault for the accident, and other factors.

Get a Free Legal Evaluation of Your Uber Accident Claim Today

If you’ve been involved in an Uber car accident and have additional questions about the Uber accident report process, contact an experienced attorney for a free case review to evaluate the incident and help you with the claims process.

Injured in a car accident?

Get matched with a car accident attorney in 60 seconds or less.
Get a free evaluation

How to Check Your Driving Record: A State-by-State Guide

How to Get Compensated for Common Car Crash Injuries

What to Do in a Car Accident: A Step-by-Step Guide

How to Get a Police Report for a Car Accident: 5 Tips

What Is a Salvage Title?

How Do You Look up License Plate Numbers?