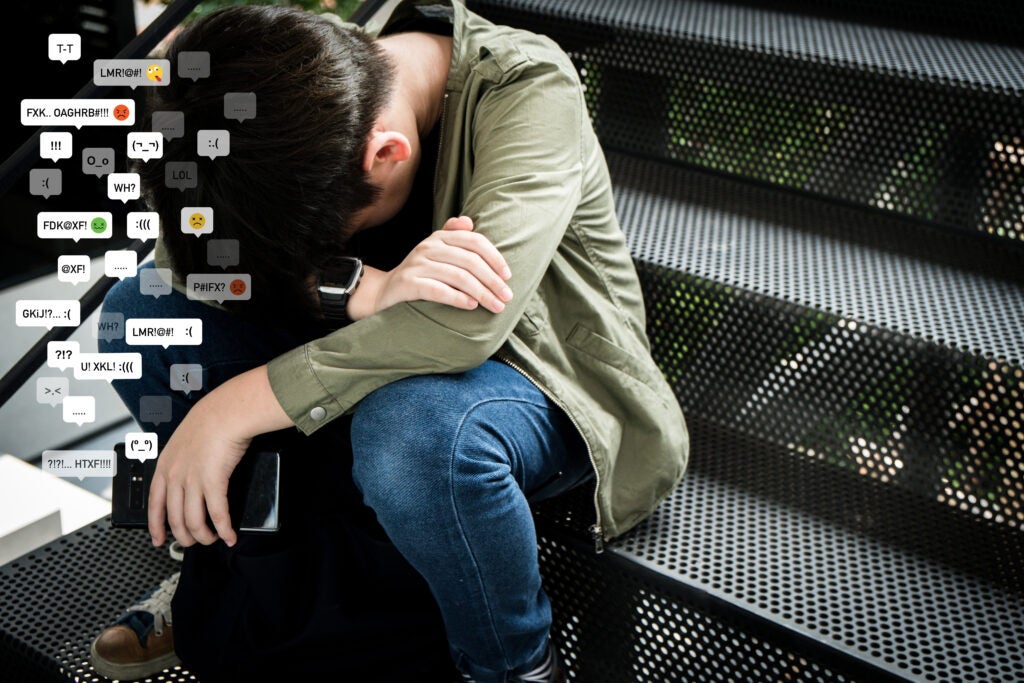 The general definition of cyberbullying is the “willful and repeated harm inflicted through the use of computers, cell phones, and other electronic devices.” A good cyberbullying definition also includes the different names by which this crime can be called, such as electronic bullying, e-bullying, SMS bullying, or online harassment.

There are no federal laws regarding online harassment, but is cyberbullying illegal in your state? In 44 states the answer is yes, and these states prosecute cyberbullying as a crime.

In states where cyberbullying isn’t a crime, statutes may still require schools to prevent bullying and protect victims in other ways, such as:

Another solution to online harassment is civil liability. Cyberbullying leads to other torts, which can provide monetary damages to compensate victims or their parents.

Online harassment by itself is a misdemeanor. Penalties may include fines, imprisonment of up to one year, community service, and protective orders. If the online harassment caused more serious crimes — including assault, battery, rape, or murder — the defendant could face felony charges.

Forty-six states — except for Alabama, Michigan, Montana, Nevada, and New Hampshire — require schools to conduct disciplinary procedures if a student commits an act of cyberbullying. California, for example, allows schools to suspend a perpetrator or recommend expulsion.

State laws may also allow schools to consider rehabilitation. Aside from suspension and expulsion, Texas law includes alternative education programs for the perpetrator as an option after a cyberbullying incident.

For example, Washington schools must designate a primary contact who implements anti-bullying policies and receives complaints. The policies must also include provisions specifically protecting transgender students and developing prevention tactics.

There are 25 states that allow schools to regulate off-campus behavior. The Supreme Court authorized schools to address behavior outside of school hours if the behavior involved serious threats or bullying against teachers or other students.

States with these laws generally take the same approach as the New York legislature. They recognize that most cyberbullying happens outside school hours and disrupts students’ lives and educational progress. So, the laws seek to reduce that threat and enhance student safety.

Is cyberbullying illegal in your state? Even if the answer is “no,” that doesn’t mean cyberbullies escape from other consequences.

While you can’t hire an attorney to file a “cyberbullying complaint,” your issue may fall under other torts, including:

Risks and Impacts of Cyberbullying

Why is cyberbullying illegal? The impacts of online bullying can be far-reaching. Laws and policies are intended to reduce those impacts and punish offenders.

According to the Cyberbullying Research Center, 27.2% of 14-year-olds and 27.7% of 15-year-olds reported being cyberbullied in 2021. While it’s easy to argue that bullying is nothing new, cyberbullying can have substantial impacts on victims

Many school policies encourage kids to tell a trusted adult if they face cyberbullying. However, teenagers are often reluctant to “snitch” on their peers. So if you notice any sudden changes in your child, make sure to talk to them about cyberbullying and let them know you can help if they’re being harassed online.

If cyberbullying is a crime in your state, there’s a good chance minors could face charges in the juvenile criminal system.

When it comes to juvenile offenders, states focus on rehabilitation rather than punishment. Depending on the extent and impacts of cyberbullying, a minor may face:

If a court finds you responsible for your child’s cyberbullying, it may impose:

If a court finds an adult guilty of online harassment or cyberbullying, the focus turns to punishment — not rehabilitation. Since online harassment is a misdemeanor, you may pay fines up to $1,000 and serve up to one year in prison.

Is Cyberbullying Illegal in Your State?