Chase Bank: Is There a Limit to How Much You Can Deposit at an ATM?

These days, most national banks aggressively promote the use of ATMs for a multitude of banking functions. ATMs are cheaper to operate and service than traditional branches as they simply require a power supply and an ample supply of cash and deposit envelopes. They don’t demand wages and they’re less expensive to insure than the physical structure of a typical branch building. So, is there a limit to how much you can deposit at an ATM?

Since banks consider ATMs to be an important cost-cutting tool, these machines come with few practical restrictions. Most ATMs are constrained by withdrawal limits that are dictated more by the physical limitations of the machine itself than by security concerns. The typical Chase Bank ATM’s withdrawal limit is set at $400 or $500 to prevent a handful of high-rolling customers from depleting the machine’s reserves of cash until its next servicing appointment. Depending upon the ATM’s location, it may sit for several days without being visited by an authorized bank representative. Although ATMs typically carry more cash on Fridays to account for that day’s higher-than-usual volume of cash withdrawals, their withdrawal limits usually remain the same on the weekend. By contrast, few ATMs have deposit limits. 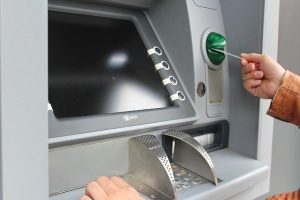 Can I Do Check Deposits At An ATM?

Since banks want to encourage ATM use, these machines are designed to be capable of accepting check deposits in virtually any amount. Of course, the checks must be:

They must also be deposited using an official “deposit envelope” dispensed by the ATM itself. To prevent forgery and other nefarious activity, funds deposited via large checks may be subject to a lengthy holding period. This period lasts until a qualified bank employee has examined the check and determined it to be authentic. Depending upon the day on which the deposit occurs, funds deposited in this manner may remain on hold for several business days. This holding period may be further lengthened at third-party ATMs and may be significantly shorter at ATMs attached to branch offices. The former type of ATM may be visited by a technician just twice per month while the latter might be emptied and restocked once per day.

How Do I Deposit Money Into My PNC Account when the Bank Is Closed?

Some ATMs have deposit limits for cash deposits. These are typically quite large and exist mainly to deter customers from depositing large amounts of cash to already-full machines. However, some banks maintain customer-specific deposit limits. If a customer has a history of making deposits and then immediately withdrawing funds, the bank may place a mandatory hold on his or her account.

Insurance Claim for Exterior Water Pipe Leak?
Where Can I Find 12% Mutual Funds?